Sgt. Maj. Timothy Timmins, Office of the Provost Marshal General Military Working Dog Program, said the monument was commissioned by the Military Police Regimental Association as a way to commemorate the contributions of the working dog.

“The working dog has been part of the regiment for well over 50 years,” Timmins said. “They’re a big part of ‘assist, protect and defend.’”

He called the monument a tremendous way to honor a small but valuable part of an already small regiment.

“A lot of people say dog handlers are emotional — and there is some emotion that goes into what we do dealing with a living animal, but I would say we are a very passionate group,” Timmins said. “Every day, no matter what, when they go into the kennels that dog is excited to see them, and there is just something that gets you excited about that.”

Hall witnessed this firsthand when he spent an afternoon studying the way the dogs move. He said he was inspired by the interactions he saw.

“The relationship between the dog and the handler is something that is unbelievable,” Hall said. “They didn’t even pay attention to me being there. They were all about the handler and that special relationship.”

Timmins said he is thankful Hall was able to capture the playful side of the Military Working Dog.

“I’ve been to more memorials than I care to count. A lot of them are kind of sad, and there is a place for that,” he said “But this really, truly captures the honor, the dignity and the joy of the working dog. When you talk about assist, protect and defend, I can’t think of a better symbol of our regiment than our Military Working Dog. He lives to serve. He serves his handler; he serves his country, and that’s really what we’re all about.”

The statue dedication followed the annual Memorial Tribute held in observance of MP Regimental Week marking 79 years of the Military Police Corps. It joins three other statues in the grove, also created by Hall. 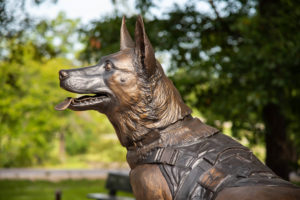 Fort Leonard Wood is a thriving and prosperous installation that has evolved from a small basic training post more than 75 years ago to a premier Army Center of Excellence that trains more than 80,000 military and civilians each year.