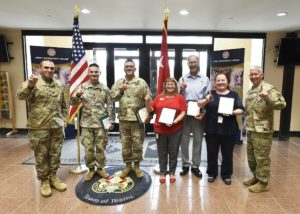 “We had a really good campaign this year,” Matthews said at the ceremony. “We achieved all of our goals.”

“I know how hard you worked,” Paine said. “You were out, getting after it, contacting units, not letting up — you guys are the ones who made the difference.”

In total, Pollack, Hooper and Stump briefed more than 7,400 service members in 104 units. The key to their success was tenacity, Hooper said. They went back to units multiple times when new cycles of trainees arrived.

Pollack said they were just honest with the service members they briefed — the program sells itself.

“We kept our briefings short and sweet,” he said. “We talked about the program, how it can help, and that you never know when you’ll need it.”

Matthews said even though the annual campaign has ended, anyone may donate to AER at any time.

Visit https://www.armyemergencyrelief.org for more information on the program.

Fort Leonard Wood is a thriving and prosperous installation that has evolved from a small basic training post more than 75 years ago to a premier Army Center of Excellence that trains more than 80,000 military and civilians each year.