Don Murray, deputy director of the U.S. Army Training and Doctrine Command Proponent Office–Geospatial, or TPO-GEO, was commissioned as a Kentucky Colonel to recognize the positive role he plays in his community.

As the oldest and perhaps most well-known honorary colonelcies conferred by a governor in this country, the Kentucky Colonel title is given to individuals who make noteworthy contributions to society. A Kentucky Colonel need not be a resident of the state of Kentucky, but they must be a good representation of Kentucky culture, folklore, traditions and values, according to the state website.

Murray’s supervisor — a Kentucky Colonel himself — presented the certificate on behalf of Kentucky Governor Andy Beshear.

Col. Kenneth Frey, director of TPO-GEO, was commissioned as a Kentucky Colonel in 2005, at the conclusion of his command of Company A, 14th Engineer Battalion, at Fort Lewis, Washington. He said Murray is a good fit for the title.

“Not a week goes by that Don mentions some civic thing he has to attend to,” Frey said.

Murray said he was completely surprised and humbled to receive the commission.

“I’m not from Kentucky,” he said. “I’ve driven through it a couple of times — stayed the night — but I’m looking forward to getting involved and finding out how I can help. It’s really an honor.”

After Murray’s wife, Cecilia — who also plays an active role in the community as the executive director of the Waynesville-St. Robert Chamber of Commerce — posted a video she made of the certificate presentation, Murray said a number of people he “knows and respects” came forward to welcome him to the group.

The work Murray does in the community includes several positions in local non-profit organizations, as well as a volunteer effort with Pulaski County as an election judge, first helping handicapped voters and presently as precinct supervisor.

Murray said he enjoys being associated with “like-minded people.”

“People who believe in service and giving — so, right off the top, you’re in good company,” he said. “I enjoy helping the community, helping folks. That’s really important to me.”

As a child, Murray said he can remember his father doing similar work in the communities outside the installations where he was stationed.

Murray, who also had a 25-year Army career before becoming a Defense Department civilian, has been at Fort Leonard Wood since he arrived as a “green suiter” in 2004. He said he feels at home here.

“I like the people,” he said. “There are so many retirees and active service members who live in the area. It feels like an extension of my upbringing. People are open; they’re welcoming. I originally worried there wasn’t enough here, but it’s got everything that I want. I can drive for anything I need, but I find I don’t make that drive that often.”

In nominating Murray, Frey noted Murray is not only very valuable to his community, but he also carries the “spirit of the NCO” in his role at TPO-GEO.

“Don is a retired Army First Sergeant,” Frey said. “He is the absolute backbone of the directorate and knower of all things. To manage his job and do all this civic activity, I absolutely had to recognize him.”

Murray said he would challenge anyone to look for positive ways to get involved in the community.

“There are a number of groups that do a lot of great work,” he said. “If this is the community you want to live in, you should be involved. I’m really excited to be recognized for the little bit of work I do around here.” 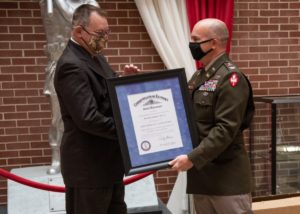 Fort Leonard Wood is a thriving and prosperous installation that has evolved from a small basic training post 80 years ago to a premier Army Center of Excellence that trains more than 80,000 military and civilians each year.