FORT LEONARD WOOD, Mo. (June 9, 2022) — Established June 14, 1775, more than a year before the signing of the Declaration of Independence, the U.S. Army is older than the nation it serves. In celebration of 247 years of service, Maneuver Support Center of Excellence and Fort Leonard Wood leaders have many events planned throughout the week.

Tuesday begins with a division-style birthday run, starting at 5:30 a.m. on Gammon Field. Later that morning, an Army Birthday golf scramble is scheduled at 9 a.m. at the Piney Valley Golf Course. That same day, a traditional Army cake-cutting ceremony is set to take place at 2:45 p.m., followed by a concert with the 399th Army Band at 3 p.m. and a Retreat ceremony beginning at 4:30 p.m., all on MSCoE Plaza.

A fun run/walk is scheduled from 7 to 8 a.m. June 16, starting behind the Daugherty Bowling Center at the corner of Illinois and Kansas.

Reporters wishing to cover these events should contact the Public Affairs Office by noon Monday, June 13, at 573.563.4145.

Fort Leonard Wood is a thriving and prosperous installation that has evolved from a small basic training post 80 years ago to a premier Army Center of Excellence that trains nearly 80,000 military and civilians each year. 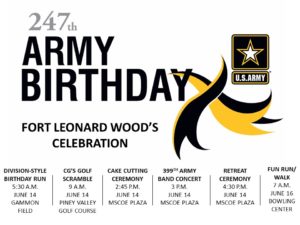