“This ceremony is truly something exceptional,” said Maj. Gen. Kent Savre, Maneuver Support Center of Excellence and Fort Leonard Wood commanding general and reviewing officer. “And rightfully so, because the United States Army Military Police Corps is exceptional — critical to our Army, critical to our national security and the standard bearer for professional policing around the world.”

“Since the day I handed her the Military Police Regimental Colors she has maintained high energy and a positive atmosphere in which she has enabled this incredible regiment to continue to live up to its distinguished lineage,” he said. “As commandant, Brig. Gen. Martin has always maintained a high sense of regimental pride across military police formations by caring for Soldiers, families and civilians.”

Savre added, “Simply put — Donna truly lived the mantra: “Of the Troops and for the Troops.”

Martin said the regiment is set for success with Bisacre in charge.

“It’s been my honor to serve as your 49th commandant,” Martin said. “As I leave this great regiment in the very capable hands of the next commandant, my only wish is that I was able to make a difference in the short time I was here.”

After welcoming the Bisacre family back to the installation, Savre said Bisacre has an impressive resume.

“Having served as the assistant commandant just three years ago and most recently as the commanding general of U.S. Army Corrections Command and the deputy commanding general of the U.S. Army Criminal Investigation Command. With his wealth of experience, extraordinary vision and inspirational leadership — the Army could not have picked anyone better to take on the responsibilities of leading our Military Police School into the future,” Savre said.

Bisacre thanked Army senior leaders for their trust and confidence in him to lead and then listed three promises to the regiment.

“It is a true honor and privilege to serve as the 50th chief of the Military Police Regiment and commandant of the United States Army Military Police School. Our regiment today is strong and heading in absolutely the right direction,” he said. “I promise to give my all to enable the readiness of our regiment…I promise USAMPS will continue to be an excellent teammate with the team of teams at MSCoE and Fort Leonard Wood. And most importantly, I promise to uphold the professional covenant of the leader to lead and fully commit myself to coaching, teaching, development and caring of our Army’s most important resource — its people.” 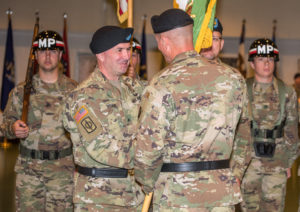