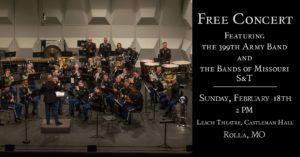 FORT LEONARD WOOD, Mo. (Feb. 12, 2018) — The 399th Army Band and the Bands of Missouri University of Science and Technology will perform in concert at 2 p.m., Feb. 18 at the Leach Theatre, Castleman Hall.

“This is an annual event we do about the middle of February each year,” Chief Warrant Officer 2 Benjamin McMillan, 399th Army Band commander, said. “The performance is a joint venture with the 399th and the band program at S&T.”

The Army band commander said the concert will include something different this time.

“Members of our unit will be performing with one of the Missouri S&T bands for a portion of the concert,” McMillan said. “Then, the 399th Army Band will perform as a jazz ensemble, which is new this year.”

“We’ll be playing variety of jazz genres including Duke Ellington charts, Count Basie charts and a Latin chart called the ‘One Note Samba,’” he added. “It’s been at least two years since the Army band has performed big band jazz, and we’re really looking forward to it.”

McMillan added, the family-friendly concert is free to attend and open to the public.

The Leach Theatre is located at 400 W. 10th Street in Rolla, Missouri.